GrainOut is a subsidiary of Benzoil that specialises in food and beverage by-products.

Approximately 10% of the vegetable oil used in the production of biodiesel is captured as crude glycerol by-product (Kerley, 2009).  See Table 1. 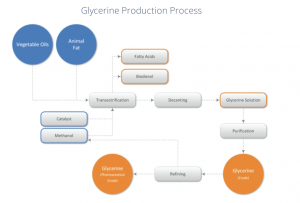 In the USA, research has shown that replacing up to 10% of feedlot cattle’s corn diet with crude glycerol has no detrimental impact to growth performance (Kerley, 2009). The research now shows that carcass value or meat quality is not adversely affected by feeding crude glycerol.

Twenty crossbred steers were used to assess effects of dietary supplementation with crude glycerol as a substitute for corn grain on performance, carcass traits and meat quality. No significant effect of crude glycerol inclusion was observed in any of the growth performance and carcass characteristics traits studied.

Also, there were no apparent effects of diets on meat quality (pH, water holding capacity, drip losses and cooking losses). The study concluded that crude glycerol could be used as a substitute for corn grain up to the level of approximately 21% of dry matter in the diets of finishing steers (Chanjula, Raungprim, & Yimmongkol, 2016).

Vegetable oils pricing has increased by over 250% (Mintec, 2022) in the last 2 years (refer table 2), making crude glycerol much more commercially appealing at nearly one third the cost of vegetable oils.  As biodiesel production soars, the supply of crude glycerol will continue to increase (USA Patent No. WO 2008/133894 A2, 2008). 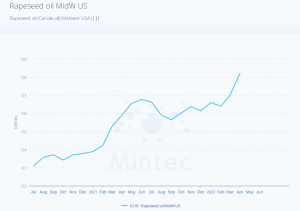 The consistent nutritional benefits make crude glycerol a more commercially attractive energy source for feedlot cattle.  Its application increases marbling by up to 10% whilst having no adverse effects on meat colour, tenderness and pH.

GrainOut can assist with any queries or sample/trial requirements for crude glycerol, please contact us on 0437 965 270.